Last night, the NFL Draft took place in Nashville, Tennessee. Football fans across the country tuned in to see if their respective teams would capitalize on this next wave of young football talent. With the coveted #1 overall pick, the Arizona Cardinals selected reigning Heisman Trophy winner Kyler Murray. Murray, who has been compared to the Seattle Seahawks quarterback Russell Wilson, appears to be a promising dual threat offensive weapon for years to come.

However, in the year 2005, a paper titled “The Loser’s Curse: Overconfidence vs. Market Efficiency in the National Football League Draft” was published by economist Richard Thaler. In it, Thaler and his colleague Cade Massey suggests that the “highest picks in the draft were overpaid relative to their eventual NFL performance, while second-round picks were bargains relative to their eventual NFL performance.” The economists suggest that the middle of the second round picks ought to be most valued; these draft picks were most likely to have justified salaries given their on-field performance. 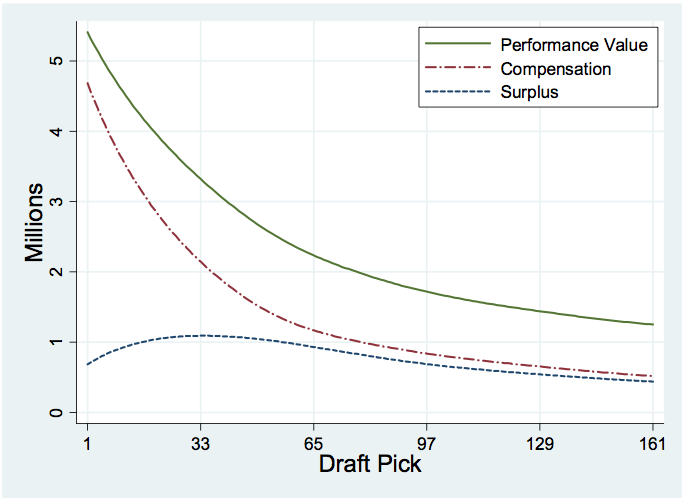 As displayed in the above draft, the highest overall picks indeed have the highest performance value. Although, these players also possess the highest compensation. As the blue line (surplus, or value) shows, the highest valued players are in fact in the late first round and early second round. Yet, teams rarely trade down from the top overall picks. Despite the findings made by Thaler and Massey, teams continue to overvalue first round draft picks and refuse to trade down.

It is important to note that the initial research of Thaler and Massey was conducted before the current CBA between the NFL and its players’ association. In the newer CBA, a total rookie compensation pool was established. Prospects selected highest in the draft earn the most money, with salary earnings decreasing as the draft progresses. The reduction in rookie salaries was made in part to ensure enough salary cap space to pay veteran players. This change had a significant impact on the salary structures for top picks in the NFL draft. As a reference, the number one overall pick in the 2010 draft was Sam Bradford, who signed with the St. Louis Rams. He signed for 6 years and $78 million. The following year, Cam Newton of the Carolina Panthers signed for four years and $22 million. That being said, the curves within the above graph may be shifted based on the new compensation model and subsequent on-field performance.

It will be interesting to see if Kyler Murray and other first round draft picks will enjoy the same level of success in the NFL as they did in college. Perhaps the stubborn individuals within NFL draft rooms know more than the economists.