Following the collapse of the financial sector in the U.S, another audit of Greece’s finances was conducted, and it was revealed that the years since the 2004 audit found that Greece had understated its debt and deficit ratio to debt. This kept Greece from being able to participate in the financial sector i.e., borrow money to pay off previous loans, which brings us to the debt crisis. The International Monetary Fund, the European Central Bank, and the European Commission bailed out Greece, and this, together with debt owed to other Eurozone members comprises roughly two-thirds of Greece’s debt. This explains why EU and Eurozone members are reluctant to keep loaning to Greece, because they already have accumulated a large amount of the debt from them. 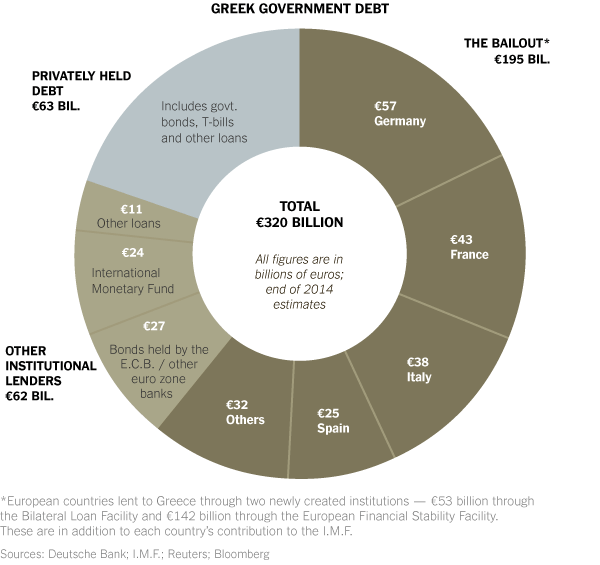 On another note, the bailout, and subsequent loans, have mostly gone to paying down previous debts, rather than being circulated in the Greek economy. Critics have blamed this on harsh austerity measures that accompany the bailout agreements. The people of Greece agreed and voted to reject the then most recent loan terms during a national referendum. Ironically, when the terms were renegotiated, they were even stricter than the ones rejected earlier. Other countries, specifically Ireland, Portugal, and Spain, who have already taken measures to correct their economies, and Ireland’s debt is already falling. However, each of these countries’ situations are unique, and of the four countries, Greece has the highest unemployment at 25.6% and a much higher debt to GDP ratio.

That’s not to say that countries with a high debt to GDP ratio are bad economies, but there needs to be the expectation that they will be able to pay for it, like in the United States. But since the 09-10 Greek audit, creditors lost trust in Greece’s ability to pay its debts, which ended up being a self-fulfilling prophecy. Potential lenders saw Greece’s doctored finances as a sign that it couldn’t meet its obligations, and stopped lending to Greece. But it was this lack of lending that actually led to Greece not being able to meet said obligations.

Greece now has to subject itself to stringent loan agreements, which it has been doing since the start of the crisis, but its economy hasn’t showed meaningful signs of recovery. As a follow up, I’d like to spend some time covering critiques of how economists think the situation should be handled, as well as a critique on the concept of the euro itself.