How much of our success is determined by randomness? I would bet that it is more than most people would like to think. In light of the hotly approaching Super Bowl, I want to start by looking at The Seattle Seahawks over the past few years to demonstrate how success can sometimes be so dependent on chance and randomness. Note: I am not trying to say their entire two-year run has been based on luck and chance, although, my Packer fandom might explain my motivation for this… 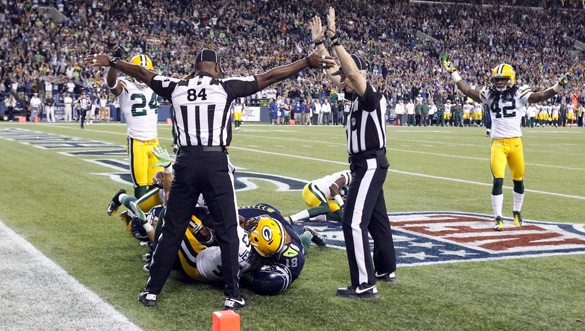 I am simply trying to point out how their recent success has been influenced by random and sometimes unlikely events.

First, lets look at their secondary, the “Legion of Boom”. It is comprised of 3 pro bowlers: Earl Thomas, Kam Chancellor, and Richard Sherman. Thomas was drafted in the first round, Chancellor was drafted in the 5th as well as Sherman. From looking at basic percentages, we can see how unlikely it is have this combination of players. The first round gives a team about a 40% chance of finding a pro bowler while the fifth round gives a team only a 4% chance of drafting a pro bowler. These numbers combined tell us that the Seahawks had only a .064% of drafting that combination of players that have been so instrumental to their success over the past two years.

This is by no means meant to be a sophisticated analysis, but just an example of how unpredictable our world is. People are simply trying to find ways of managing the randomness. NFL coaches are victims to this randomness. Look at the heads of the teams in the Super Bowl. Bill Belichick posted a meager 36-44 with the Cleveland Browns where he was fired in 1996. He then joined the Patriots the next year as an assistant coach. He was given the head coaching job in 2000, and the very next year scored possibly the best quarterback to ever play the game, in the 6th round. Talk about capitalizing on randomness. Belichick is now considered to be one of the best coaches of all time, but you have to wonder how much of that success was generated from possibly the best value pick of all time. The Patriots dynasty of the past decade and a half was forged from a 6th round pick that turned into a hall of fame quarterback (I’m not going to attempt to find that probability of something like that occurring. Divide 1 by all of the 6th round picks ever made and you might get close.)

One could take the stance, however, that the Brady pick was a function of Belichick’s ability as a talent developer and scout, rather than being a totally random event. This is where the management of randomness enters into the argument. When the Seahawks took Richard Sherman in the 5th, how much can be credited to the scouting and coaching staff, and how much should be attributed to chance? How much blame should coaches, or CEO’s for that matter, actually receive for a few years of poor performance? It seems that sometimes even the most brilliant minds in their respective industry will experience years where the chips don’t fall their way, while at the same time, less skilled coaches and executives may catch a few key breaks and experience some success.

It becomes extremely difficult to allocate credit where it is due when you factor in all of the seemingly random events that add up to either success or failure. Do those in charge really have that much influence over the success of their organizations? Obviously, it appears as those who have weathered the effects of randomness over time have found a a hundredth or a thousandth of a percentage in their favor over time, but I would say that the majority of coaches, CEO’s, and other decisions makers are mostly victims of the unpredictable environment around them.

All in all, both the Seahawks and the Patriots experienced their share of breaks on their respective paths to this year’s big game. Both of these teams had what you may call low probabilities of being where they are right now, but have done just enough to influence their probability of success in the right direction (one PSI at a time). Would the Seahawks be here without the .064% chance of the Legion of Boom coming together? Would the Legion of Boom become the Legion of Boom if put into a different situation? Would the Patriots be here without Brady? Would Brady be Brady without Belichick and the Patriots? The answer to all of these questions might just be: probably not.