The last few weeks in Windhoek were spent working on our final projects, trying to bargain for souvenirs, and eating out at restaurants we had always wanted to go to. Our integrative projects were designed to incorporate concepts we had learned in all of our classes by picking a topic and analyzing it from different “lenses,” or class subjects. I chose to focus my research on international trade in Namibia, and specifically the role of the Namibian Ports Authority in Walvis Bay. In February, we visited Namport, and I was still very fascinated about the role and strategic location of this port in attracting investment into the country. I discussed the history of the port tracing its roots all the way back to when the Dutch East India Company used it as a small stop off on the way down to South Africa. I also talked about the political diplomacy issues surrounding the port. When Namibia gained its independence from South Africa in 1990, South Africa made a concession that they still owned the Port of Walvis Bay, making trade much more profitable for them and much more harmful for Namibia. Since 1994, Namibia has owned the Port and is capitalizing on its location: companies use the port to import products to Zambia, Zimbabwe, the DRC, and Angola, as well as parts of South Africa. I also talked about future development plans– the port’s work with the Namibian universities to build capacity and future leaders, as well as an increase in trade with emerging strong economies such as Brazil, China, and India. All of us presented our projects to all of the staff and a few guests at a fancy conference room downtown, and everyone did a wonderful job. We covered a variety of issues, from land conservancy, to gay rights, to tribalism.
Another highlight from my last week was heading to the outskirts of Windhoek with the Young Achievers for Global Youth Day. They organized an amazing program for kids and adults living in the informal settlement of Kilimanjaro to discuss pertinent issues such as staying in school, having goals and dreams, safe sex and healthy relationships. I was so proud of my Young Achievers friends who organized such an inspiring outreach event. It was so wonderful to see Namibians helping fellow Namibians as well. Often times, outreach events are organized by NGOs that have ties with the European Union or a foreign aid organization. There was something very special about seeing local youth working to empower their peers.
I had some very heart-felt goodbyes with my Katatura host family, my dear fellow intern friend from the Ministry, my friends from Young Achievers, other locals I had met throughout the semester, and the CGE program staff. We cleaned and packed up the whole house and headed to the airport on April 29th. The drive to the airport was nice because we drove all the way across town, giving us the chance to say goodbye to favorite shopping centers, restaurants, and old hangouts.
Culture shock began when we entered the airport in Windhoek. When we landed there in January, I thought it was kind of a small, unimpressive place in the middle of nowhere. When I used the restroom those many months back, I even believe a roach scuttled across my foot. When we arrived this time, we were impressed by how slick and modern everything felt…there was even air-conditioning! The bathrooms felt luxurious because there was: a door that locked, a toilet that flushed, toilet paper, a sink with running water, SOAP, a mirror, and papertowels. Paradise! Usually, we found ourselves with some strange combination of those services, but never all at once! 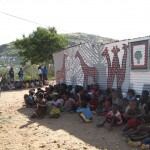 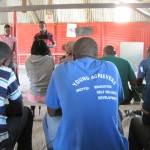 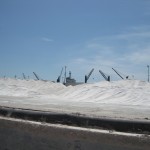 Fluorspar, the stuff that goes in toothpaste, at the Namibian Ports Authority