I have always wanted to go to Hallstatt, just to see it.  For people who have never heard of it, it seems to be a nice and quiet place by the lake; for people who have heard of it, it probably is a touristy name!  I am rather embarrassed to say I wanted to go there, just a bit, because I really think it’s a touristy place.  Honestly, if I just wanted to find some outdoor trails by a lake, I would perhaps choose some other locations by the Salzkammergut lakes.  However, part of the reason I decided to take this trip this weekend is to avoid all the tourists in the summer, so of course I will have to visit Hallstatt first!  I plan this trip rather hastily.  I bought the train tickets three minutes before the ÖBB office closed at five on Friday afternoon, and took the morning train on Saturday.  The idea started to form when S, her Austrian language buddy M, and Sam, whom we met, who is from the UK and was only in Vienna for an academic conference, were sitting in Cafe Hawelka late at night one day this week.  M went home last weekend (she is from the countryside) and she started talking about the perfect view she had from her bedroom window.  The weather just started to get warm this few weeks, the grass was bright green, and in the background was the towering mountains, still with snow on the top.  Then Sam said he is going to Innsbruck this weekend, where one can supposedly see the beautiful Austrian Alps from Universität Innsbruck.  I really want to see the mountains.  M suggested that I should go before summer comes and all the snow melts away.  The conversation ended without me having any serious ideas about leaving Vienna this weekend.  This week was concert week, meaning the Music Performance Workshop class held a chamber music concert.  I have to admit that the class is rather unorganized and many things happen at the last minute, which greatly added to the stress.  Towards the end of the week I, like many other students, felt quite burnt out.  I really wanted a break to get away to somewhere quiet and close to nature; I even wanted to just be alone, and be able to think clearly to myself.  The desire grew bigger.  There were always moments like this when I was at Puget Sound, when I just really wanted to leave all that I am working on and take off, but I was always just a wish.  Then I realized that here, I can actually make this come true.

So Saturday morning, I hopped on a train.  The train ride itself was absolutely gorgeous, the weather was perfect, too.  Hallstatt is about a four-hour train ride from Vienna.  I arrived at the station early in the afternoon and took a ferry across the Hallstätter See to get to the little historic salt mining town.  I walked around the town for a bit, and of course, took the picture that appears so frequently on the cover of travel magazines and books.  But the thing is, I was actually there! 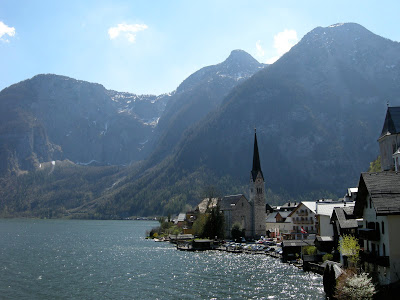 Then I decided to move on to the less touristy place.  I found a trail that I think is supposed to be the Malerweg, the path which poets and artists in the previous century have taken and where they found inspiration.  I could always hear the rushing sound of Waldbach (Forest Creek) as I walked.  The trails should lead up to a waterfall, which I eventually found. 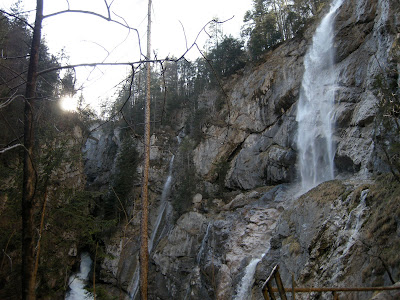 I wandered around some more and ultimately decided to spend the night there.  So I went to a youth hostel and got a bed.  It seemed really quiet there and I was given a dorm room all to myself.  After securing a room, I took a different Wanderweg behind the hostel, this time up the hill to get a good view of the lake. 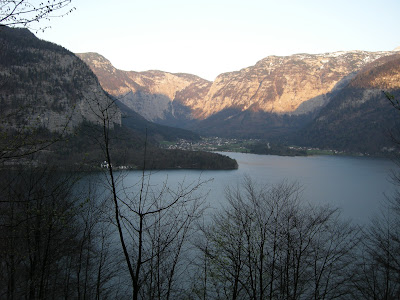 For the evening I sat by the lake to watch the nightfall and read until I could no longer see what’s printed on the pages.  In the morning I got to see the morning sun shining on the Hallstätter See, which was part of the reason why I decided to stay for the night.  Overall, I guess not much happened, not very exciting, not too eventful, but I thought it was, to me, very… mentally fulfilling, which was exactly what I needed.  I was very glad I went, and I was fully aware of how foolish it could be, going there by myself and all.  But this is what I will be doing during my tour after my study abroad program ends in May anyway, so I might as well get some practice, hahaha.  Of course, next time I will choose some smaller, obscure places that are just as charming but less touristy!